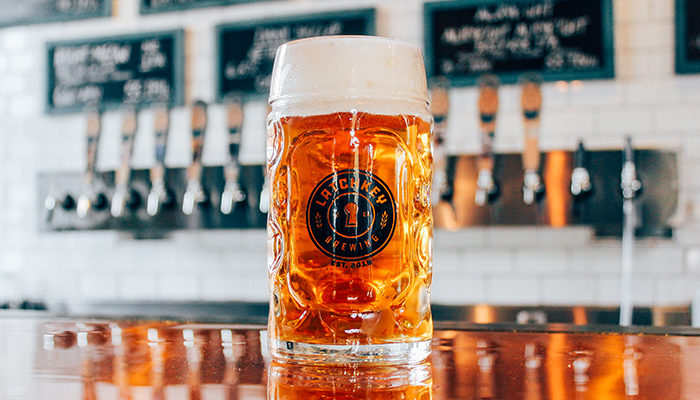 From the Beer Writer: I am a writer. I love language. More than that, I love the things you can do with words, letters, and plays on both. I’m particularly fond of palindromes, or words that are spelled the same way backward and forward. (Yes, I’m a nerd… what of it?). So it’s pretty fun to come across a local beer employing one in the naming of a special collaboration. That beer is RegalLager, and it was brewed by Mission Hills outfit Latchkey Brewing for nearby bar and after-work hang, the Regal Beagle. But there’s more to like about it than its clever name. RegalLager is a German-style festbier, another thing I am very fond of and, thanks to the changing tastes of craft beer enthusiasts, have been able to find in much greater plenitude this year. Regal Lager is the latest in a nice line of slightly bready, abundantly yeasty, and amazingly drinkable Oktoberfest-inspired lagers I’ve come across over the past month. Each is slightly different in terms of color, sweetness, and yeast character, and that’s what has made tasting them so enjoyable. With Germany’s Oktoberfest period coming to a close this Sunday, this figures to be the last local version of this style I come across. It’s extremely fresh and a nice way to say auf wiedersehen to these lagers. You can do so tomorrow when Latchkey celebrates the opening of its tasting room patio. RegalLager will be on tap along with four other German-style beers, and Regal Beagle will play the part of collaborative reciprocator, catering the soiree with its well-suited, sausage-focused cuisine.

From the Brewer: “We manage our beer styles through our yeast. Early generations will produce our lighter (prop) lager and pilsner styles, while later generations allow us to create heartier, higher-alcohol styles like our doppelbock and this one, our festbier. This particular beer was at the prime of the yeast strain, so we wanted to make it special. We cut no corners. We used organic pilsner malt from a California craft maltster, Admiral Maltings, based in Alameda. We fermented for three weeks and lagered it for another nine weeks, totaling a 12-week production. The idea came from a conversation we had with our friends and neighbors at the Regal Beagle. They’re located in our backyard, so we spend a lot of time at the Regal Beagle. In turn, they also spend a lot of time at Latchkey, including running a pop-up kitchen from time to time. We had joked about collaborating on a palindrome beer called “RegallageR,” so based on timing earlier this summer, we agreed to collaborate and the Oktoberfest lager would be that beer. We worked with the Regal Beagle kitchen and bar staff to nail down the recipe, and they were there with their brewing boots during the brew day. When all is said and done, we nailed the beer. We’re releasing a 6% alcohol-by-volume, easy-drinking, traditional German festbier that has a biscuity, soft-cracker note with a hint of honey and a dry, floral finish. The beer is going to be available in our tap room, as well as Regal Beagle, Side Car, and Regal Seagull. This is the perfect beer to complement our Oktoberfest party and patio-slash-biergarten opening.”—Gerald Dolente, Co-founder & Director of Brewery Operations, Latchkey Brewing