Local brewers producing Acoustic Ales, as well as own line of beers inside Middletown space

A wave of beer history washed over me (so to speak) as I entered the Mission Brewery Plaza in Middletown (1795 Hancock St.). The Plaza was built in 1913 to house the original Mission Brewery and over a century later, Acoustic Ales moved in and revived the brewing operations. But now Acoustic has outgrown the space and intends to open up a facility in Carlsbad. Recently, the Latchkey kids—that is, Latchkey Brewing—have moved in and have taken over brewing Acoustic’s recipes to help it meet production demands until the new facility opens. They’re also brewing some tasty beers of their own.

After touring the brewhouse with co-founders and brothers-in-law Matt West and Gerald Dollente, as well as head brewer Anthony Beach, we spoke in-depth about their plans and philosophies. CityBeat readers can catch up on their pedigrees on the brewery’s website (latchkeybrew.com), but these individuals intend on appealing to local consumers, tourists and beer professionals alike. They proudly announced that they refuse to put out any beers with off-flavors and have a “not-afraid-to-dump” attitude. 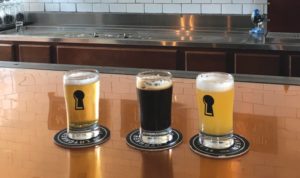 The San Diego 1915 Lager was the first beer Latchkey brewed in the space and they specifically decided that the name should pay homage to the century-old tradition of brewing that hangs in the atmosphere. Coming in at 4.6 percent ABV, this refreshing lager is crisp and flavorful with a unique, residual sweetness in the back end. It’s as if it gently whispers “just one more sip.”

Next, I had the Real Slim Shazy Pale, a 4.9 percent ABV hazy pale ale that marries the traditions of the West Coast and the trends of the East Coast IPA. With over three pounds of hops per barrel, the hop aroma jumps out of the glass. More surprisingly, the beer has a crisp, dry finish that cleans up a mouthful of flavorful hops that Beach refers to as the “sexy good stuff.”

Finally, I tasted the OPP (On Point Porter) which is measured at a fair 6.8 percent ABV. This porter has a decadent mouthfeel and is brewed without any roast or black malts. The aroma and palate are filled by a wonderful range of chocolate notes, which Beach says comes from the Midnight Wheat, Simpson’s Chocolate and Carabohemian malt.

The beer was delicious, but the best part was learning about how much West, Dollente and especially Beach want consumers to engage with their beer. They know that the process starts with the staff and want every employee to spend some time brewing. They also plan on showing the recipes to consumers in the front of house.

“We have no secrets,” says Beach, who hopes that Latchkey Brewing will be a haven for consumers that work in the local beer industry.

The tasting room felt a little cozy, but West tells me that they plan on developing the remaining parts of the tasting room to include an independent kitchen, an outdoor beer garden and small exhibit that highlights the history of San Diego beer. Once Acoustic Ales finally settles into its new space, Dollente and Beach have plans to introduce kettle and traditional sours, funky saisons and a barrel program.

These Latchkey kids have worked in myriad places over the years, such as Cutwater, Ballast Point and Green Flash, but it seems like they’re all grown up now (is Latchkey men a thing?) and found a collective home together.