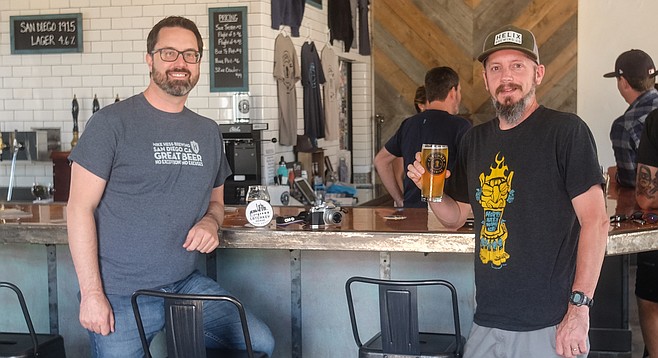 Bloggers and beer fans who investigate every brewery in San Diego

An estimated 150 breweries operate in San Diego, but it’s hard to understand what that number really means until you’ve tried to visit them all. A small number of San Diegans speak from experience. 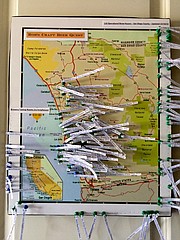 Take Rob Strobel and Bill Vanderburgh. Strobel documents his quest to drink at every San Diego brewery with the Instagram handle @sdbeertour. Vanderburgh blogs about his at CraftBeerInSanDiego.com. I caught up the two of them at newly opened Latchkey Brewing, giving all three of us a chance to tick it off our lists.

“This will be 135, I think” said Strobel, tasting the first beer of a flight.

There were about 120 breweries when Strobel started. He tracks his progress with a pushpin map his wife made for him for Christmas. But dozens have since opened, closed, changed hands, gone on unannounced hiatus, or brew without a public tasting room, so simply maintaining an accurate count requires a lot of effort.

Vanderburgh makes the effort, updating his blog to keep track of openings and closings on a nearly monthly basis. He currently pegs the number of active breweries with tasting rooms you can drink in, at 142, of which he’s now visited 138. He’d hit them all at one point; the remaining four have all opened within the past month or two.

Jeff Fancy runs into the same problem writing his blog, SanDiegoBrewReview.com. “My original quest was to visit every brewery here in one year, but the list kept growing,” Fancy says, “It actually took me three years to catch up and visit them all.” Thanks to California Wild Ales opening to the public for the first time in late April, Fancy is once again a brewery short of a full set.

I tracked down a handful of beer fans — not bloggers — who claimed to have, at some time or another visited them all. Enthusiast Teresa Swift says she had accomplished the task last spring, but nearly 30 new ones opened last year and she has yet to catch up. Ghaza Atassi and Daniel Bessonov also point to 2017 as the year they made it to every brewery, only to stop trying as dozens of new ones kept opening.

“Every time I get close, 3 or 4 more pop up,” says bartender Micah Itzaina, punctuating the Sisyphean challenge.

These days, even those who have been at it the longest must hustle to keep up. Homebrewer Michele Atkins Starsiak started collecting breweries in 1989, the year San Diego’s oldest brewery, Karl Strauss, first opened. She’s completed the list repeatedly over the past ten years, thanks to her habit of moving in quick. “I usually go the week a new place opens,” she says. Still, as of this writing, she’s fallen three short due to travel.

Aside from brewery openings, brewery collectors cite the distance between breweries as the biggest obstacle to completing the set. They don’t want to drink and drive, so they have to arrange for designated drivers or otherwise work around the limits of public transportation. Strobel and Vanderburgh have teamed up to visit about a dozen breweries together, and have discussed splitting an Airbnb in north county, so they can both check out newly opened Beach Grease Brewing.

Of course, for most, finding the time present a major obstacle. Jeff Fancy claims the advantage of being a retired teacher, and Vanderburgh started his blog while on a ten-month sabbatical from his philosophy professorship at CSU San Bernardino. Visiting every brewery gets tougher for those who work full time, or even those who work part time writing about breweries. In three years writing this column, I’ve still yet to drink at 16 brewery locations.

So what does one do after making it to every San Diego brewery? Fancy says he’s started to add those in Orange and Riverside Counties. Vanderburgh has visited nearly all local satellite taprooms, brewpub franchises, and a craft cider establishment. In all, he’s blogged about 183 locations.

For those who have given up the pursuit of going to every brewery, the challenge isn’t quantity, but quality. Vanderburgh concedes visiting all local beer makers is the surest way to reveal the flaws in our beer community. “It does get to be a bit of a slog,” he says, “because — and we all have to admit this — that there’s plenty of beer in San Diego that’s not awesome.”

That’s the consensus of others as well, including SDHopAddict.com blogger Paul McGuire, who says he’s made it to 90-percent of the breweries, but doubts he’ll ever get to all. Or, as he puts it, “The goal is to visit all, but some are not a priority.”