The Winners Of Our Annual Reader’s Poll 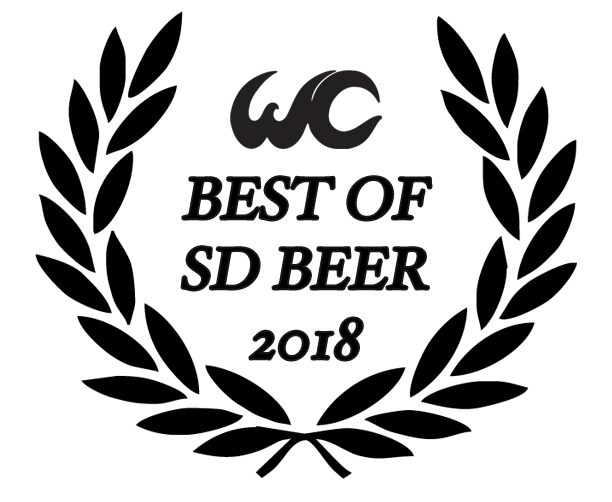 Brewing in the historic Mission Brewery Plaza, Latchkey took over from Acoustic Ales, hosting a grand opening in April 2018. Since then, they’ve produced an impressive array of styles, and they’re now constructing a small kitchen and a new private event space.

This 7.0% ABV IPA is described as having a “resinous dankiness with citrus notes” backed by Mosaic and Cascade hops. The name references a fun trip to the Great American Beer Festival for brewer Nathan Stephens, a Ballast Point alum, who used to work as a structural engineer; brewing allowed him to use his imagination.

It seems fitting that the best beer in town was also judged Best IPA. This West Coast-style IPA is one of the top sellers for the company, which just celebrated two years in business in late November. In that time, they’ve branched out from their Brewery Igniter spot in North Park to open a satellite “Waterfront Biergarten” tasting room in Point Loma.

Now a three-time winner of the category (2015, 2017, 2018), Modern Times Beer is one of San Diego’s fastest growing brewing companies. Their new restaurant is open in Encinitas, with locations in Santa Barbara and Anaheim in the works. In other news, Modern Times debuts their first cider on January 10.

This beer is a 50/50 blend of Monsters’ Park and Modem Tones, both aged for 7 months in bourbon barrels which had previously housed maple syrup. Following the blend, the beer was conditioned on freshly-roasted coffee beans, toasted coconut, and vanilla. The result? Flavors and aromas of tiramisu, coffee, chocolate, and roasted marshmallows.

North Park Beer Co.’s Kelsey McNair made waves this year, especially on social media, where the activated charcoal and edible glitter beer made its rounds. But we don’t think that’s why he won — Kelsey’s abilities in a wide variety of beer styles impressed drinkers inside the beautiful brewpub, and led him to a bronze for Bird Park Pilsner at GABF.

Simcoe, Citra, and Motueka hops express juicy tangerine, orange, pineapple, and guava flavors in this IPA. Malted oats and heirloom Halcyon malt give this beer a smooth mouthfeel, and it still has a clean, dry finish.

The Brut IPA style came on to the scene this past year thanks to Kim Sturdavant, the brewmaster at Social Kitchen and Brewery in San Francisco. Burning Beard’s take on the style is effervescent and dry as a bone, just as a dry Champagne, or brut, is. The El Cajon brewery’s beer features Citra and Mosaic hops, reaching 6.5% ABV and 20 IBU.

with its own bar. Soon, the county’s first local creamery will offer cheese for sampling and purchase, and a new 10-barrel pilot brewhouse will provide tasting room-only beers. Mark your calendars for the second Art & Beer Night Market on February 6.

Winner of Best Bottleshop three years in a row, Bottlecraft now boasts five county locations, with the latest arriving (with a big patio) in Sorrento Valley in May 2018. The company also runs a Bottlecraft in Virginia Beach, and they’re working on another in Long Beach.

This South Park spot, now twelve years young, has been named Best Beer Bar three years in a row, as well as in 2014 (Toronado slid in for 2015). This past year, Hamilton’s hosted monthly “Second Saturday” featuring breweries from around the country, big Oktoberfest and Christmas-themed blowouts, and a wide variety of Firkin Fridays.

For the fourth year in a row, Rancho Bernardo’s URGE Gastropub is our top Beer Restaurant, calling themselves “the American reinterpretation of the traditional English Pub.” Their comfort foods by Executive Chef Adam Griffin go great with a huge tap and bottle list.

Two years and two wins in this category for Karl Strauss’ big Beer Week event that displays a dizzying array of collaboration beers from around San Diego County. Proceeds from the event benefit both the San Diego Brewers Guild and the North Park Main Street Association.

In the summer of 2017 brewer Brian Crecely joined Kilowatt from AleSmith. At AleSmith, Crecely worked his way up from cellarman to brewer, eventually managing the barrel- aged sour program and brewing specialty, one-off batches. Readers feel Crecely’s experience and knowledge — completing the American Brewers Guild’s Brewing Science and Engineering Program — have paid off for Kilowatt’s portfolio.

The above article appeared in a West Coaster Special Edition for January 2019. Please pick up a copy when you are at a better beer spot around the county, or click below to read with mobile/web reader. Happy New Year!